Adam22 is a multitalented personality known for working as a journalist, podcaster, record executive, adult film star, and internet celebrity. He is famous for hosting the pop culture podcast “No Jumper”, which focuses on interviews with underground rap artists and tastemakers. He is also known as a ‘Bicycle Motocross’ (BMX) rider and the creator of the ‘BMX’ website ‘The Come Up.’

The 37-year-old was born “Adam John Grandmaison” on 24 November 1983 in Nashua, New Hampshire. His mother worked as a librarian. He grew up alongside a sister. His father was arrested for a white-collar crime when Adam was six years old. When he was 16, his father was released.

Adam22 went to study at Nashua High School South. He later enrolled at a community college in Massachusetts, where he studied for a year. Afterwards, he moved to the University of Massachusetts Lowell. Before graduating, he dropped out of college since his grades had begun to fall frequently. Adam subsequently chose to relocate to New York, much to his mother’s chagrin. He currently resides in Los Angeles, California.

How did Adam22 Become Famous?

Grandmaison founded the website “The Come Up” in 2006, which has since grown to become one of the most successful BMX websites of all time. Later, he founded OnSomeShit, a BMX riding team and apparel brand with a retail location on Melrose Avenue in Los Angeles.

After working as a blogger, Adam found a lot of potential in podcasting, especially in the domain of rap. This led him to start a podcast named No Jumper by partnering with Atlantic Records in 2012. His first interview on the podcast was with underground rapper Xavier Wulf, which garnered positive reviews from the audience.

Since then, the hype of his podcast has skyrocketed. He has interviewed artists like ASAP Mob, Tyler Grosso, Antwuan Dixon, and $uicideboy$. To this date, he has garnered over 3.94 million subscribers along with 1.1 billion views.

How much Net Worth does Adam22 Have?

The 37-year-old earns a handful of amounts from his YouTube and blogging site. As of 2021, Adam22’s net worth estimated is around $500 thousand. 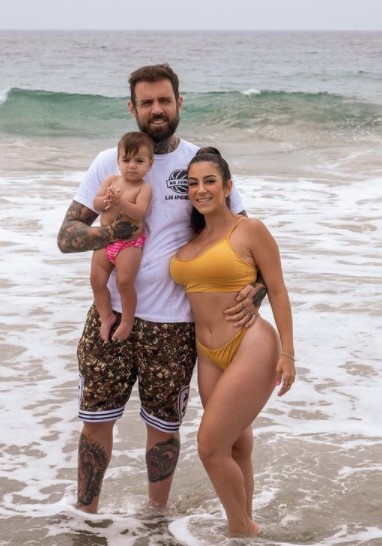 Furthermore, Adam22 and Lena are blessed with a daughter Parker Ann Grandmaison, born at 7:40 pm on 14 November 2020.

How Tall is Adam22? Height, Weight

Adam22 stands tall at the height of 5 feet 11 inches and weighs around 72kgs. He has black eyes and black hair. He has also inked several tattoos on his body.

The podcaster can be found on several social media platforms. He has more than 1.6 million followers on his Instagram handle and over 836.1 thousand followers on Twitter.