TikTok has been a huge platform for people to come into prominence. Likewise, the 18-year-old Brooke Monk became a global sensation after she started using TikTok. In just a year, she amassed over 14 million fans on her TikTok account, which is quite an impressive accomplishment. She has also a huge presence on YouTube with over 395k subscribers.

Where was Brooke Monk Born?

The 18 years old TikTok star was born on 31 January 2003 in the United States. She is American by nationality and belongs to Caucasian ethnicity. Growing up, Brooke was a creative child as she was passionate about art and makeup. She usually shares creative makeup tricks and tutorials with her fans. 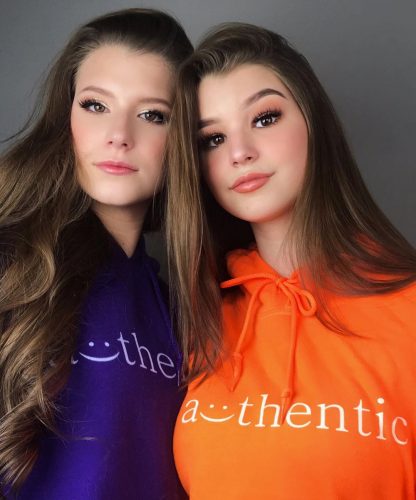 Brooke Monk and her sister Audra Monk for her Merch “Authentic.”

Brooke comes from a right-wing conservative family. She once featured her parents on a YouTube video where she blindfolded them and surprised them with brand new iPhones. Her mother’s name is Amy Monk. However, her father’s name is still a mystery.

Brooke is the middle child among five children born to her parents. She grew up with her four sisters. Her sister, Audra Monk, is a dancer.

How did Brooke Monk Gain Popularity?

The TikTok star was homeschooled her entire life. She created her TikTok account in October 2019 and began posting lip-sync, makeup, and dance videos. Her relatable contents earned millions of attention that helped her establish herself as a social media personality. As of now, she has an impressive following on TikTok with over 14 million fans.

Is Brooke Monk Dating Someone?

Brooke has earned thousands of male admirers after she started her TikTok journey. But is she available for dating?

Recently, On 14 Feb 2021, she surprised her fans with a picture of her new boyfriend, Sam Dezz, who also happens to be a social media star. She shared some cute pictures with her boyfriend. Later, she uploaded a YouTube video that featured her boyfriend and her dad, where she filmed their journey of traveling to LA for the first time. Her fans were swift to admire the bond between them.

The 18 years old TikTok star is very attractive in her looks. She has a decent height of 5 feet 3 inches and weighs around 54 kg. She has beautiful black eyes and brown hair.

Brooke spends most of her time on Tiktok and YouTube. She is mostly active on Tiktok where she uploads makeup, dance, and lip-sync videos. Likewise, she is also an Instagram star with over 1.4 million followers. Besides, she has amassed 395k subscribers on her YouTube channel where she posts Q&A, makeup tutorials, and vlogs.