Mark Hoppus is best known as the bass player and lead vocalist of the renowned pop-punk band Blink-182. He collaborated with the band +44 for the album “When Your Heart Stops Beating.” He also wrote columns for the Risen Magazine as a part of the music documentary “One Nine Four.”

Mark Hoppus was born on 15 March 1972 in Ridgecrest, CA, making his birth sign pieces. The 49 years old rock singer is American by nationality and belongs to Finnish-American ethnicity. He was born to Connie Hoppus and Tex Hoppus. He has a sister named Anne Hoppus.

Regarding his academic qualification, Mark first went to Burroughs High School. After attending his second year at Annandale High School, he received his bass guitar and started playing it. After that, he did his graduation from the California State University-San Marcos.

What’s better than seeing your friends and family or the individual whom you admire become free with something that would have caused serious problems in their life. Yes, the admirers of the renowned singer Mark Hoppus can finally be happy as he was declared “cancer-free.” 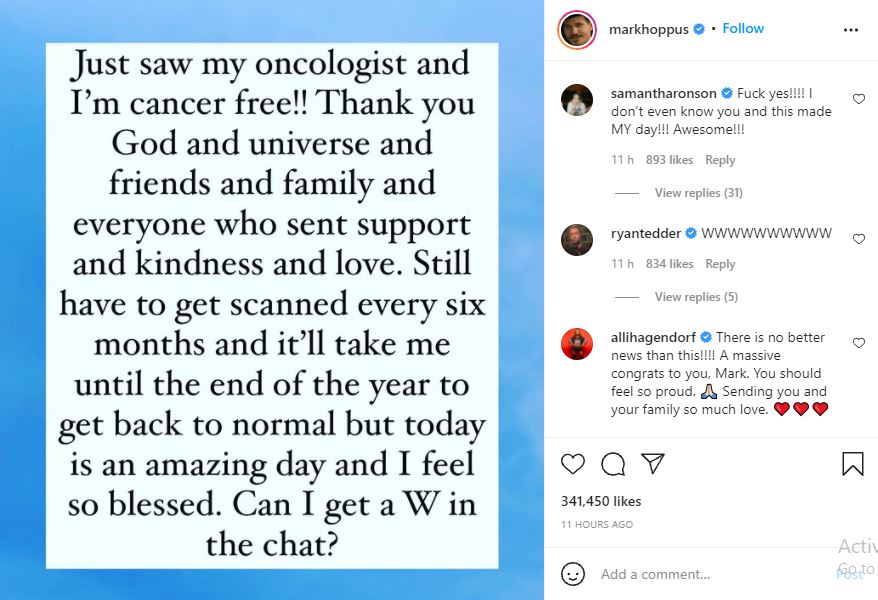 Back in June 2021, Mark shared that he was going through chemotherapy. Now he has announced that he is cancer-free. The pleasing news was shared by himself via his Instagram handle on 29 September, saying:

” Just saw my oncologist and I’m cancer free!!. Thank you Gid and universe and friends and family and everyone who sent support and kindness and love.”

“It’ll take me until the end of the year to get bac to normal but today is an amazing day and i fell so blessed”.

How Did Mark Hoppus Rise To Fame?

In the summer of 1992, Mark was introduced to Tom DeLonge by her sister. After being together for a while, Tom recruited his old friend Scott Raynor, who worked as a drummer. And eventually, the trio named their band Blink-182. The band released their debut album “Cheshire Cat” in 1995. However, their album didn’t impact any of the US charts. But their second album, Dude Ranch, got better recognition and did better commercially too. The album reached the 67th position of the US Billboard 200. 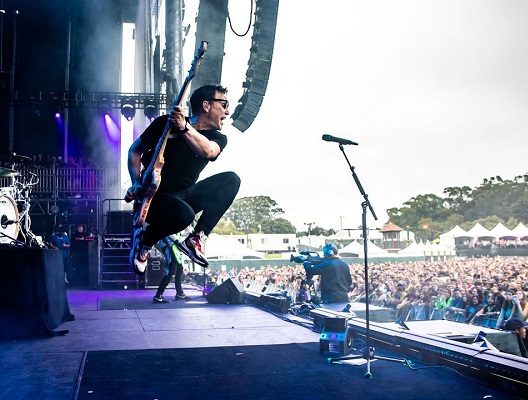 Moreover, Mark collaborated with the band +44 for their only studio album, When Your Heart Stops Beating, in 2006. The album made it to the 10th position on the US Billboard. And the lyrics on the song was all written by Mark. Similarly, after having a break of a couple of years, Blink-182 released their sixth album “Neighbourhoods” in 2011, which stood up in the 2nd place on the US Billboard. The album successfully sold over 151k copies in its very first week of release.

In 2016, the band released their six studio album California, which made it to the top of the US Billboard 200 and even reached the top ten in other many countries. The album also received the Grammy nomination for the Best Rock Album.

How Much Money Does Mark Hoppus Earn? Net Worth, Salary

Mark is living a very lavish and wealthy life. All thanks to his profession as a musician. Working as a lead singer for the band Blink-182 for nearly three-decade, he has accumulated eight digits bank balance. As of 2021, his net worth swings around $80 million.

Who is Mark Hoppus’ Wife? 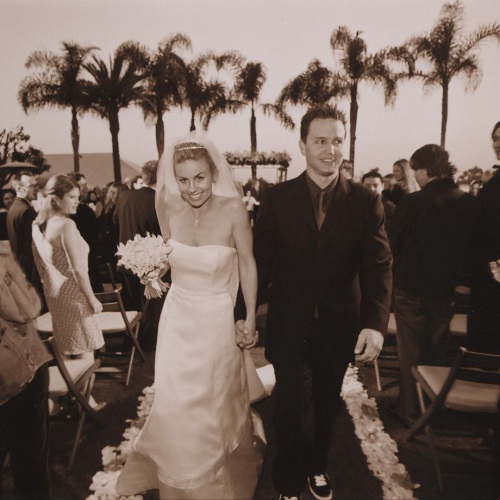 Mark is a happily married man. He is married to his long time girlfriend, Skye Everly. The love birds first met each other in 1999 at a rehearsal of the music video. After dating for a year, they tied the knot on 2 December 2000. They welcomed their first and only child, son Jack, in 2002.

Mark stands tall at the impressive height of 6 feet 3 inches and weighs around 78 kilograms. He has light brown hair and blue eyes.